One of the best television series I’ve watched in the recent past was The Good Wife.  The show embraced the all too familiar wife of a politician caught in a sex-scandal a la President Clinton, Eliot Spitzer, and Jim McGreevey.  When the creators of The Good Wife moved on to create BrainDead, a science fiction political satire series, I felt compelled to watch the first episode.  Now, I’ve completed watching the 10th.  The show’s protagonist suspects that Capitol Hill politicians and staffers have been infected by brain-eating bugs, leading to extreme political views, legislative gridlock, and politicians who no longer work for the people. 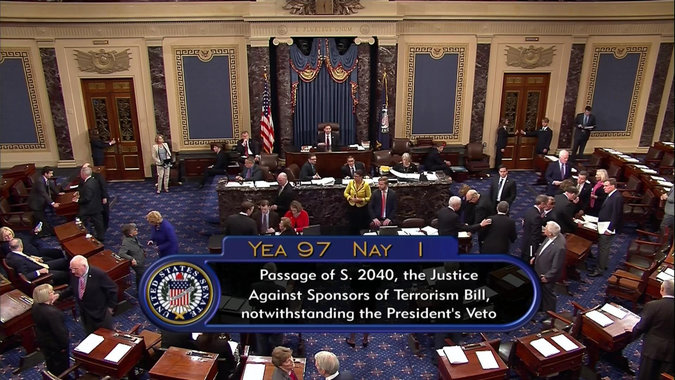 This week, I was taken aback to learn that both the House of Representatives and the Senate overwhelmingly voted in favor of S. 2040, Justice Against Sponsors of Terrorism Act, overriding President Obama’s veto of the bill.  Some may be more familiar with S. 2040 as the bill that would allow the families of 9/11 victims to sue the Kingdom of Saudi Arabia for involvement of the attacks.

Upon his veto of the bill, President Obama sent the Senate a written explanation for his veto, writing, in part,

Second, JASTA would upset longstanding international principles regarding sovereign immunity, putting in place rules that, if applied globally, could have serious implications for U.S. national interests. The United States has a larger international presence, by far, than any other country, and sovereign immunity principles protect our Nation and its Armed Forces, officials, and assistance professionals, from foreign court proceedings. These principles also protect U.S. Government assets from attempted seizure by private litigants abroad. Removing sovereign immunity in U.S. courts from foreign governments that are not designated as state sponsors of terrorism, based solely on allegations that such foreign governments’ actions abroad had a connection to terrorism-related injuries on U.S. soil, threatens to undermine these longstanding principles that protect the United States, our forces, and our personnel.

Clearly, there are troubling aspects about the potential consequences of S. 2040 and President Obama was not the only world leader concerned with such ramifications.  Apparently, while the world watched the status of S. 2040, U.S. legislators in both the House and Senate, knew little about the bill they voted for–twice.

Senate Majority Leader Mitch McConnell on Thursday condemned Congress’ decision to override President Barack Obama’s veto of a bill that will allow 9/11 victims’ families to sue Saudi Arabia for any role it may have played in the attacks.

He pinned much of the blame for the override on Obama himself, however, saying that the White House was too slow to warn about the “potential consequences” of the Justice Against Sponsors of Terrorism Act, known as the 9/11 victims bill.

“Everybody was aware of who the potential beneficiaries were, but nobody really had focused on the downside in terms of our international relationships,” McConnell said, claiming that the White House failed to “communicate early about the potential consequences of a piece of legislation that was obviously very popular.”

It appears that Senator McConnell has not routinely been reading, analyzing, or considering bills voted on by the Senate.  Worse, it seems as if legislation is being passed based on sound bites, lobbying efforts, and popularity.